Manohar Parrikar arrives in Dhaka today on a two-day visit 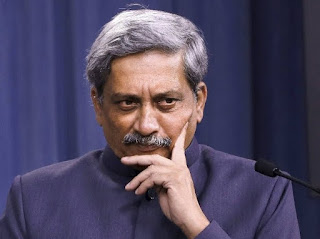 Defence Minister Manohar Parrikar arrives in Dhaka on Wednesday on a two-day visit.
This is the first ever visit of an Indian Defence Minister to Bangladesh.
The Defence Ministry says Parrikar will meet with Bangladesh top leadership in order to firm up defence initiatives ahead of Prime Minister Sheikh Hasina's visit to Delhi later in next month.
The Defence Minister is also scheduled to meet President Abdul Hamid on Wednesday followed by a meeting with the Prime Minister's Security Advisor later in the day.
He is scheduled to visit Bangladesh Military Academy in Chittagong tomorrow and on his return to Dhaka have talks with Prime Minister Hasina who also holds the defence portfolio.
Issues like bilateral naval and air force exercises, training and capability of Bangladesh defence personnel, supply of military hardware, technology transfer, co-ordinated patrolling of the international maritime boundary, joint surveillance of Exclusive Economic zones and co-operation in maritime resources offer scope for expanded bilateral defence co-operation between the two countries.
Posted by Unknown at 03:46